A Visit to Berlin 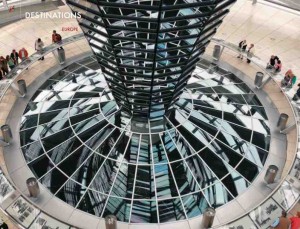 The Reichstag is a major attraction in Berlin

Reborn as the Capital City of Germany and the seat of the federal government, Berlin has also re-emerged as a cultural capital of Europe where the art and design scenes are continually developing and celebrated.

This modern, albeit nearly 800-year-old, city is a showcase for artwork, music, fashion and design created by German and international artists. As a result, tourists get a healthy dose of culture just by exploring the town.Both young and established artists have relocated to Berlin from around the world. The 1990 reunification also led to artistic riches for Germany. “For those 40 years [when the country was divided], the cultural landscapes filled up on both sides of the Berlin Wall,” says Dr. Heinz Buri, the cultural officer for Berlin Tourism Marketing. “When the wall came down, we had a double art scene. We had, for example, two museums for technical history; we had seven symphony orchestras and three opera houses. We decided to keep this huge cultural landscape.”

Here’s an itinerary for discovering this haven of arts and culture.

At the Maritim ProArte Hotel (www.maritim.de), a four-star property centrally located on Freidrichstrasse, the architecturally dramatic lobby is adorned with an impressive collection of contemporary art. General Manager Roberto Klimsch (rklimsch.bpa@maritim.de) says the hotel contains 268 original works of art. They are displayed on every floor, in public areas and many guest rooms.
Our room, #1038, had ample light and space, and served as a most comfortable retreat each evening after we collapsed from an exhilarating day of sightseeing. We were also impressed by the hotel’s two fine restaurants, Atelier and Bistro Media, which have been awarded the special EU designation of “bio-certified” for their use of ecologically produced and processed food. 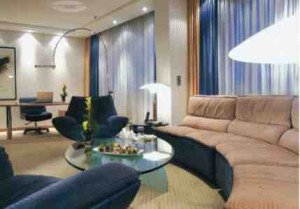 A suite at the maritim proArte Hotel in BerlinThe proArte’s 403 guest accommodations include 29 suites.

Berlin’s artful melding of classic and ultramodern architecture is exemplified by the reichstag, which is within walking distance of the Maritim proArte (as is the Brandenburg Gate). Rebuilt to house the German parliament, this historic building has been enhanced with a unique glass and metal dome on the roof, designed by architect Norman Foster.
From the top of the Reichstag, you are treated to views (through the dome) of parliament while it’s in session, as well as panoramas of the city.

Be sure to have lunch or dinner at the beautiful rooftop restaurant. Hint: If you reserve a table in advance, by calling 011-49-3022-6299-33, you bypass the lines. Nearby, the new House of World Cultures (www.hkw.de) is definitely worth a visit. Located in a building that was originally a gift from the United States and a symbol of free postwar Berlin, it houses a number of themed exhibits. During our visit, a show focused on New York’s urban culture.

Berlin has more than 175 museums and art collections, many in recently rebuilt or renovated venues. The Altes and Bode museums on
Museum Island on the Spree River feature Egyptian, Roman, Greek and German antiquities. The pergamon, also on Museum Island, is home to the Pergamon Altar, the Market Gate of Miletus and the Ishtar Gate.

We also stopped in the new Nolde Museum, which is set directly off the venerable Gendarmenmarkt square and is devoted to the German Impressionist artist Emil Nolde. The Nolde Museum shares a courtyard with au (www.vau-berlin.de), a Michelin-star restaurant serving dishes made with fresh, seasonal produce.
Several of Berlin’s most dynamic art galleries are in what was East Berlin and is now defined by bricks embedded along a line where the wall dividing East and West Berlin once stood. This area sparkles with established and gentrified artist neighborhoods whose charming buildings have been refurbished and redesigned with newly landscaped cobblestone courtyards containing cafés, restaurants, shops and apartments. The flourishing Prenzlauer Berg in this area is also full of cafés, clubs and bars and is near a local “hippie” park. During our visit, it was filled with picnickers and musicians. Nearby, the floh Markt (flea market) is a place to bargain-hunt for unusual items.
The Berlin Welcome Card (www.berlin-welcomecard.de) entitles travelers to free admission at many Berlin museums along with unlimited use of public transportation over a two- or three-day period. 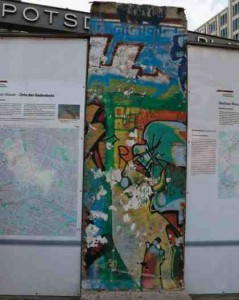 A remnant of the Berlin Wall

To find out which opera and orchestra performances are taking place while you’re  in town, check out www.visitberlin.de. That site also lists festivals, concerts and venues for jazz, rock, Latin, reggae and pop music. The most famous of the city’s orchestras is the Berlin philharmonic (www.berliner-philharmoniker.de), led by renowned conductor Sir Simon Rattle. Suggest to clients that their evening at the philharmonic include a pre-concert dinner at restaurant Diekmann im Weinhaus Huthanteed an experience to add to their “memories of a lifetime” file.
For a dramatically different experience, attend the cabaret-style revue Soap at the Chamäleon Music & variety theater (www.chamaeleonberlin.de), where a troupe of singers, dancers and acrobatic comedians perform in a hilarious production. Follow that with dinner at Schwarzen­ raben (www.schwarzenraben.de). 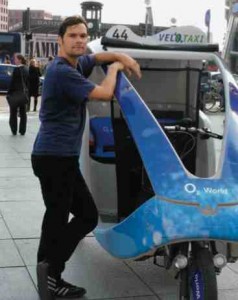 A velotaxi is a great alternative to traveling around Berlin

In Berlin, metered taxis are driven by usually friendly, English-speaking drivers. You can tour the city by velotaxi, an updated version of the rickshaw; in this case, the operator pedals. We loved gliding through Berlin’s expansive parks (one-third of the city is parkland), through town squares and onward to historical sights. To reserve a velotaxi, contact Tessa Schulz at schulz@velotaxi.de. A boat ride on the Spree is another great way to see Berlin. You will
pass several historical sights, as well as the 20 or more “beach pubs” with sand-covered grounds facing the river. There’s no swimming, but there are plenty of tables, chairs and chaise lounges on the sand for guests to soak up the sun or the moonlight on the “beach.” (Gen Y clients, take note: Berlin is known as the European city that never sleeps; many bars, cafés and restaurants are open around the clock.)

If you wish to customize a tour of Berlin’s museums, galleries and artist studios, contact Miriam Bers (bers@goart-berlin.de, 011-49-3025-1670-7) at go Art Berlin (www.goart-berlin.de); she provided a true insider’s experience in Prenzlauer Berg.